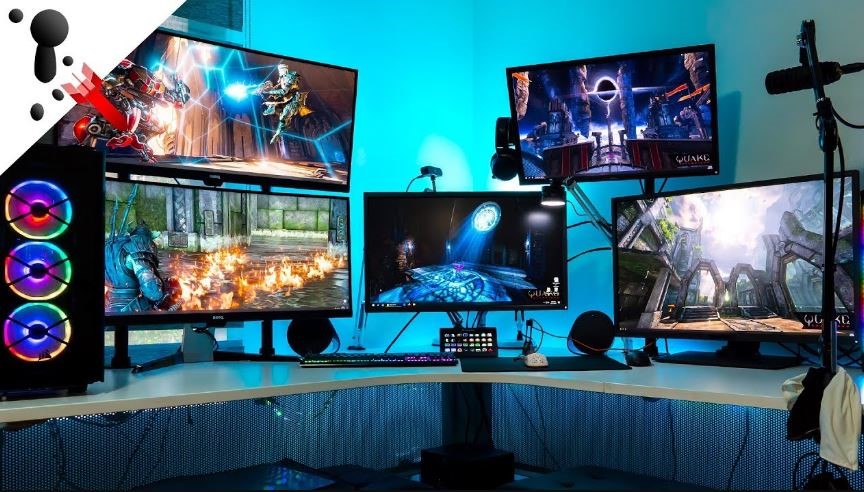 The most recent gaming consoles and high-end graphics processing units (GPUs) are now more widely available to the general public. Here are five gaming monitors worth upgrading to if you want to get the most out of your new hardware. Choosing a screen for your gaming setup is frequently the last step after choosing your system hardware or gaming console. Refresh rate, resolution, response time, and screen size are all included in this list.

Even though not all monitors are created equal, you will be able to choose one that meets your needs and your budget. For anyone wondering, this is for displays used by gamers at workstations, not in the living room. Following are 5 Monitor setups.

Odyssey G3 panels come in two sizes: 24′′ and 27′′. They’re providing players with various options based on their budget and available desk space. The 24′′ model costs £159.99 at Argos, while the 27′′ model costs £199.99 at overclockers. However, despite their lower resolution, these monitors still have a fast response time of 1 millisecond. For the most part, it’s on our list because it will make higher refresh rate gaming more accessible to console users.

Although this monitor requires an external set of speakers, it contains a 3.5mm headphone port so that users can plug in their own.

You can play (or work) in low-light conditions now. The VA panel offers superior contrast and black colour uniformity than a TN panel. On the other hand, the back has a 75x75mm VESA mounting pattern. They’re a bit on the thin side when it comes to bezels. In other words, you can put them side by side for easy viewing. With the 1800R curvature, you won’t have to move your head as much to enjoy a more continuous, immersive experience.

FreeSync is supported. As a result, AMD GPU owners may be able to maximize the performance of their GPUs. Things aren’t so rosy in the ports, however. There is no DisplayPort connection, and only one HDMI 1.4 port is included.

The BENQ 31.5-inch display is ideal for gamers who want a little more from their gaming monitor than what LG offers. With a bigger display panel and 4K resolution, you’ll have more room to enjoy the latest games’ amazing details. Again, this 4K monitor can only run at 60Hz, but it does have built-in speakers, unlike the other models.

This post is for PC gamers who want to see what a different kind of display is like. Ultrawide monitors are becoming increasingly popular as multi-monitor setups become more common. The monitor has a 1440p resolution and a 144Hz refresh rate. It also has a 1ms reaction time. Additionally, it provides more screen space for video and web browsing than a single monitor could ever hope to provide, which is one of the primary reasons to own two monitors in the first place.

It contains both built-in speakers and the option to connect external speakers, so customers have alternatives for their monitor’s audio arrangement.

Finally, Samsung is back, but with a much higher-end monitor to round out the list this time. Xbox One X, PlayStation 5, and most common GPUs can all use features like 1440p resolution and a 1ms response time. But they can’t use the higher 240Hz refresh rate. As a result, this display is more suited for users with high-end PC systems.

Except for the 4K resolution, the Odyssey G7 meets all gaming and media consumption needs. Considering that 1080p monitors are still the norm, 1440p is certainly nothing to be ashamed of. Internal speakers are absent from the G7, but if you’re considering buying one, you’re probably already planning to use external speakers or headphones.

How to choose the greatest monitor?

You can change your expectations and choose the greatest monitor for your needs if you have a reasonable budget. As a result, aspects like decent ergonomics and connectivity may have to be foregone. Regardless of which one you choose, it will all work for your dual monitor setup as long as you remember your present computer configuration while making the necessary adjustments to suit the second display.

Tougher to do their tasks:

Employees who were polled said they use more apps than five years ago and that moving between apps makes it tougher to do their tasks. App switching costs them at least 30 minutes a day, according to 68% of respondents. Insufficient screen area resulted in a significant drop in productivity.

Dual computer monitors are becoming more common in offices because it gives employees the additional screen space they require to multitask while using numerous programs and windows simultaneously. There are numerous advantages to switching to a 5 Monitor set-up in your business.

You may have to wait a long before your technology investment pays off. When you consider your budget and the time it will take to return your investment, certain technological purchases may become less appealing. While it may seem like a significant investment, switching to dual monitors on a desktop or laptop computer can pay for itself in productivity gains within a month.