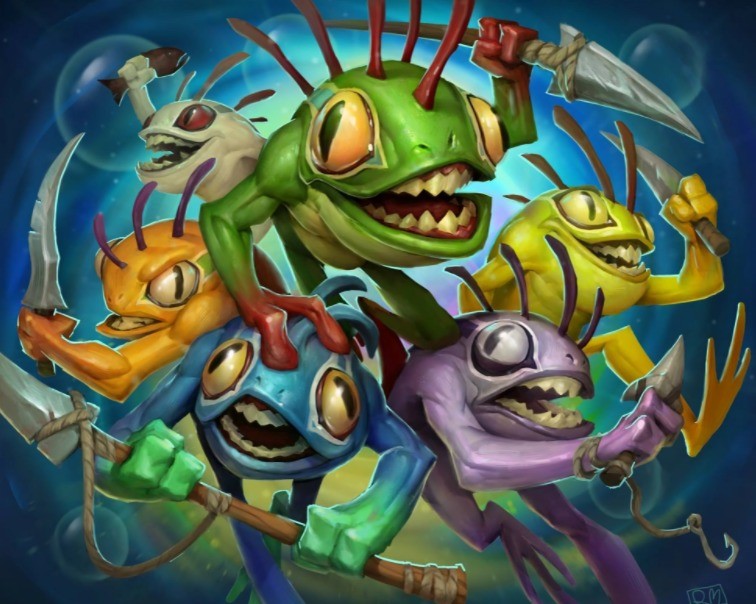 As a result of the departure of Old-Murk Eye early this year, OTK Murloc Paladin became significantly less effective. OTK potential remained, but with the addition of Ivory Knight, the deck got a lot more powerful. Anyone unfamiliar with the deck can learn more about it by reading this: The Any fin Can Happen spell is the centerpiece of this control-and-combo deck.

Explanation of the Cards:

If you’re looking for a healing spell that’s both powerful and flexible, this one is the best you can get in the game. There is no limit to how much mana you can put into it, and it can heal between 0 and 20 HP. To get some 1 HP minions off the board, you may even combine it with Wild Pyromancer.

Aside from the fact that it’s one of the most commonly used cards in any Paladin deck, there’s not much else to say about it. With Wild Pyromancer, you can get extra damage. In terms of clearing aggressive boards and ensuring that you reach your late game, it is effective.

By a long shot, this is my favorite weapon in this game, and the ability to reduce damage while clearing threats is a significant benefit, and it works well in the deck because you want to seal the game in the late game. If you’re running Keeper of Uldaman in your deck, you’ll be able to Uldaman any minion and kill it off with the weapon by taking only one damage most of the time. As a reminder, keep in mind that the healing takes precedence over the enemy minion’s attack.

Vigil of the Soul:

Don’t be fooled by the mana price! Doomsayer and Wild Pyromancer board clears will not cost you anything close to 5 mana for the spell. Using the Doomsayer at the beginning of your turn, you will be able to get to your combo components quickly because the spell is discounted based on how many minions have perished.

One of the best cards in the game, it has been mentioned before in previous articles. You may be able to heal yourself off of a card or remove a card from your hand. You’ll be able to use the card in ways you never dreamed possible. You have the option of using the most potent heal or simply selecting a card that you can use. With the ability to land an Anyfin Can Happen, you can get your combo off on the curve with this card.

It is one of the best in the game with a powerful eight drop and one of those crazy comeback cards. Your opponent can’t just face because you’ll be healing for eight every round, and that forces them to trade into or remove your 8-point heal. Another option is to harm the minion directly, in which case the card’s impact is entirely unpredictable. You may have to skip trades to ensure the healing of your hero if you’re using this card carefully.

Transformation effects any fin can happen:

It is essential to realize that if transformation effects like Hex or Entomb are used on your Murlocs, any fin Can Happen will not help them. If your opponent is saving spells to ensure your combo is thwarted, you can drop your Murlocs when clearing the board and restore them to life with any fin Can Happen. The first fin can happen rarely affected, but if you don’t check all the possible outcomes of the second spell, you might get into a lot of trouble.

The Ashbringer’s master, the man who wields it! Many people consider Tirion Fordring to be the best class legendary in the game, and I agree with them. When a minion dies, the player gets a 5/3 weapon and can stop it from going face. Deathrattle is more than likely to go off due to Silence effects being substantially nerfed. Thus you can utilize the weapon for clearing minions or inflicting 15 damage to the face across three turns.

The focus of the entire deck is on this card. Second copies of the spell let you deal one-shot damage to your opponents. Even though Old Murk Eye is no longer legal in Standard, this deck still has a lot of burst potential. This card will almost always help you win control matchups. Thus it’s no surprise that Priest and Control Warrior struggles against it.

What’s the name of the Bluegill Warrior?

It’s a decent minion on its own because you can charge into something to remove a minion or use it in conjunction with Equality to eliminate a high priority minion. Make sure it dies on the summoning turn so that no one may disturb your combination by casting a spell.

Loot Hoarder, and this are both ways you can draw cards. With Wild Pyromancer and Aldor Peacekeeper, you can get more cards by using this. The Paladin class does not have cheap card draw like many other classes in general. Therefore this is a worthwhile inclusion even if it merely cycles and gives you one card.

Warlord of the Murlocs:

When you play your Anyfin combination, you can increase the damage dealt by your Bluegill Warriors by buffing two of these cards. Later, I’ll go into more detail regarding the card’s potential matchups and how you can ensure a combo setup when you get to the final round.

Builds that aren’t what you’re looking for?

N’zoth, The Corruptor can be used as a late-game win condition in the Curator and Deathrattle theme packages, respectively. I prefer the vanilla deck over the death rattle package. On the other hand, the Curator version is fascinating since you have access to Stampeding Kodo and Azure Drake, which let you clear minions and cycle through, as well as the additional draw for a Murloc.

As an Anyfin Paladin player, you should keep in mind these tidbits of wisdom to help you win more often against certain classes. A lot is riding on your Anyfin turns. It’s pretty uncommon for people to have a hard time dealing with the entire board when they play their first Anyfin game. Keep an eye out for any surviving minions.