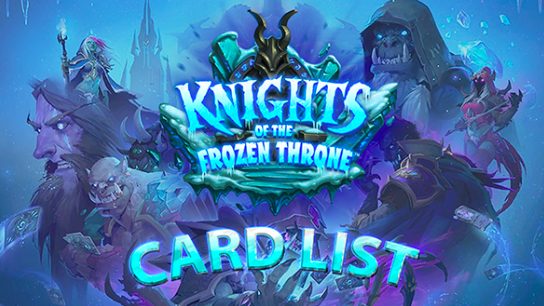 Naturally, this sudden and unexpected move shook up the existing metagame, and as a result, other decks are already flooding the ladder. In this piece, I’ll discuss all the decks with the return of the Frozen Throne I could discover online via social media or popular streamers.

Facts about Decks with the return of the Frozen Throne:

It is the deck I achieved legend with on Day 1, and although it is relatively close to the previous Control Shaman, the returning Murloc cards are doing a ton of work. The draw from Ice Fishing gives a ton of stability to the deck. It improves our chances of finding Clown Fish on turn three and grows our hand, which helps lower Goldshire Gnoll’s price from Decks with the return of the Frozen Throne.

The Shaman class requires good rolls in the early game to be successful. If you can do this, you will set yourself up for much greater success for the rest of the game. The incorporation of a card like this is a significant step forward for the deck as a whole. There is also the possibility of making an all-in Murloc list, which would be similar to what an Imp Warlock does now.

Hadronox is finally available for Malfurion to play:

Even though Hadronox could never create a deck that would become the dominant one when Knights of the Frozen Throne was first made available, many players have figured out a method to exploit it now. The Jailer confers immunity on all of our minions, Sire Denathrius draws his strength from any possible casualties we sustain, and the Hedge Maze activates its death rattle.

Because of this, a greedy strategy emerges, using the nerfed Celestial Alignment and Lady Anaconda to unleash some powerful combinations late in the game.

The Curse mechanic was never able to develop into its independent entity in a Control deck at one point. Still, nowadays, it’s more famous for its role as the direct damage component of the Imp Warlock deck. The Chinese player X might be able to convince you otherwise, though. The deck can burn the opponent’s hand by combining the Decks with the return of the Frozen Throne with the combo of Howlfiend and Treachery, which gives the deck its name.

Additionally, because of the Runed Mithril Rod, this can occur as early as turn 7. We can damage the Howlfiend with the 1/1 Imps, the returning Defile, or cards like Touch of the Nathrezim. These options are all available to us. It provides the deck with a backup way to win if the curses need to be more effective or be too slow of a strategy. It should offer Gul’dan a much greater fighting chance against combo-oriented decks, particularly as they are the most common type of deck.

The return of Animated Berserker and Forge of Souls to the standard format has given Enrage Warrior access to a new one-drop and a powerful stability card to add to its collection. The extremely interesting aspect of the deck is the far greater reliability and the use of Weapons Expert and Lady Ashvane to augment it.

In addition, the Animated Berserker should assist in causing our units to receive damage for a low cost while simultaneously compelling the adversary to deal with it to prevent more abuses in subsequent turns. Whether or not we successfully activate the weapon impacts how well the Enrage Warrior ability works. As a result, I can’t wait to try out this novel approach to the deck, which ought to turn out to be more steady and robust.

Big Priest is back in Standard:

Big Priest made a convincing return on Tuesday, back to Standard mode after being banned for a time. Habugabu mostly supported this return on his webcast. Using Shadow Essence and Masked Reveler, the deck attempts to conjure either Neptulon or Stoneborn General following its traditional construction. Once we had one in the pool, we used Eternal Servitude to get another back.

It is to feed the Amulet of Undying or Xyrella, The Devout. Turning on the jets and putting pressure on the opponent with large units is a very pleasant experience once you have successfully navigated the early game and are in a position to do so. It is also extremely powerful, particularly when one considers the amount of climbing that its designer did.

The role of Battlecry master now belongs to Rogue:

Prince Keleseth and Shadowstep were already thought to be a dangerous combination in the early days of the Frozen Throne, leading players to call for a reduction in power for both of these cards. They had only recently found each other, but the other players had already begun to pick on them. Especially Ramses, the creator of this design, has thrown a ton of Battlecry units into a deck along with Prince Keleseth and Snapdragon. This deck is going to be very powerful.

To prevent you from losing all of your cards, you get some helpful support from Edwin, Defias Kingpin, Field Contact, and Gone Fishin. The deck could be more flawless, but the combination of Keleseth, Snapdragon, and Shadowstep seemed to be a good starting point.

Special mentions for decks with the return of the Frozen Throne:

Those were the most significant changes in the current metagame, either because they had an effect on an archetype powerful enough to alter its power level or created a new one. Several more concepts are important to bring up for other types of Decks with the return of the Frozen Throne as well: