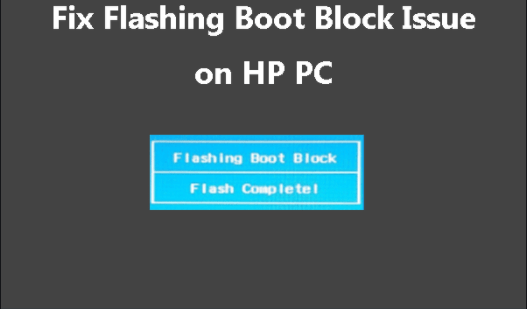 HP laptops are known to have flashing boot blocks, according to many users. This problem may appear after installing HP software or Windows upgrades. This problem may also arise if you have updated your BIOS. A black screen will appear with the message “Flashing Boot Block – percent” if this problem is present. When the flashing is finished, the blue box will indicate “Flashing Boot Block – Flash Complete!” when the flashing is finished. However, you will be unable to boot into Windows in any scenario.

The boot block is a term you may have heard of.

The boot block is a small section of memory in the BIOS that stores the bare minimum of booting instructions. This information cannot remove through a standard BIOS upgrade. A Floppy drive and an ISA video card are the only devices that Boot Block can boot from. Boot Block lets you use the floppy disc to recover the BIOS if the BIOS update fails.

Problem with Flashing Boot Block: What to Do?

The flashing boot block problem on HP laptops is linked to the BIOS. If it doesn’t work, you may always try to recover the BIOS. Anytime there’s a problem with updating the BIOS, the system tries an automated recovery of the previous version. There are several techniques for reinstalling the BIOS if it doesn’t work automatically.

Keypress combination to fix the issue:

1: Connect the power cord after turning the computer off.

2: After that, hold down the Windows key + B key while pressing and holding the button for 2 to 3 seconds.

3: While holding away from the Night key and the B key, press and hold the power button.

4: There may be a succession of sounds to listen for.

5: The BIOS Update program then launches, allowing you to restore the BIOS if necessary.

6: If, however, the HP BIOS Update screen does not appear, you may encounter the following issues:

7: It’s possible that your PC doesn’t support the feature or that there’s a problem with your hard disc.

8: Once you’ve tried that, move on to the next step.

9: The power button was left depressed for an excessive amount of time.

Step 1: Download the correct BIOS version for your PC’s model number from HP Support and install it on a working PC.

Step 2: Turn on your computer and connect a blank USB flash drive to it.

Step 4: Recovering the BIOS with a USB flash drive

Step 5: Wait for 5 to 10 seconds after turning off the laptop that needs BIOS recovery before plugging it back in.

Step 6: Ensure that the notebook’s power cord is attached before you begin using the computer. While you’re getting better, keep the device linked to the internet.

Step 7: The BIOS file is stored on a USB flash drive connected to a laptop USB port.

Step 9: Keep pressing Windows + B (or Windows + V) even after releasing the power button.

Keep pressing and holding the Windows key while pressing the V key, and then press and hold the Power button for 2 to 3 seconds to complete the process.

Release the Start button while pressing the windows down key and the V key simultaneously because when CMOS Reset window or beeping sounds display.

Press Enter to restart the computer after a successful CMOS Reset.

How to Unblock the Bootloader?

If the boot block code is not altered, the shorting trick should work. The shorting method should not work if the /sb change is used rather than just the /wb switch while flashing the bios. For each chip, the two parameters that must crimp to generate a checksum error are unique. However, the address pins with the highest numbers are frequently used (A10 and above).

Corrupted AMI UEFI chip recovery Because of the Bios BLOCK section of the BIOS, which is responsible for booting the computer, corrupted BIOS can be recovered on motherboards employing BOOT BLOCK BIOS. Although the system appears to start, there is nothing visible on the screen. There will also be an indication of the floppy drive light, and the os will attempt to read from it continuously. If your motherboards have an ISA video port, connect your video card to it.

When you turn on your HP laptop, it has a black screen. When you turn the machine on, go to the BIOS UEFI diagnostics and check everything is well.

Go to HP’s website and select “Support and Driver Downloads” > the product’s model or serial number should enter > the operating system should choose, and then the drivers should display. Include a website address or hyperlink in your message.