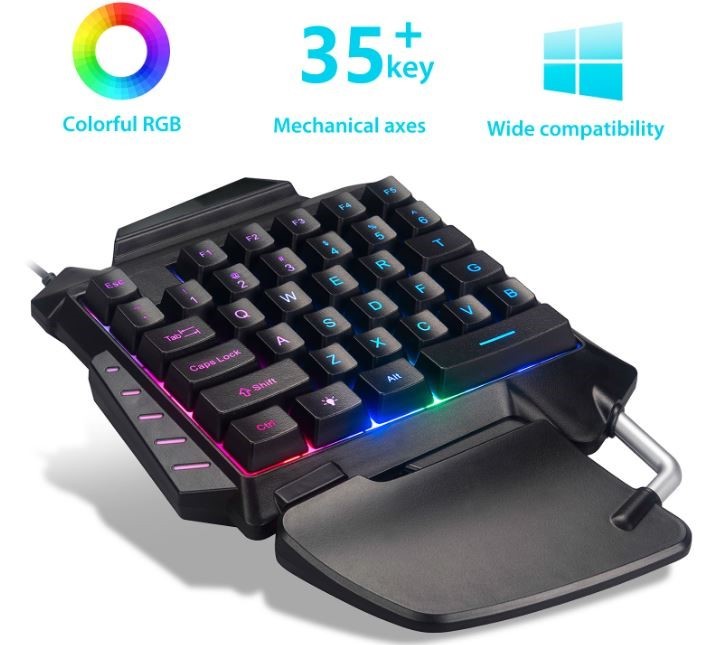 Half keyboard gaming is not a new concept. Using a recently invented input device — the mouse — and a one-handed chord keyboard, Engelbart and English were already working on computers in 1968. With one hand, the user typed text while using the mouse to input geographic data. Half keyboard gaming, in contrast to the mouse, has only found popularity in a few niche markets, such as keyboards for the handicapped.

The initial goal of this design was to create a keyboard for palmtop computers, one that was compact but yet allowed touch typists to use their current abilities to input text. Prior attempts aimed towards reducing the conventional QWERTY keyboard’s key size and spacing. The issue with this approach is that it results in keyboards that are too tiny to use with both hands.

Mechanical keys respond to button presses by actuating. Keys that function only when an electric signal passes through them are known as membrane keys. Membrane keys have more latency problems; therefore professional players prefer mechanical ones. Following are types of Half keyboard gaming.

Apex Pro TKL from Steel Series has an ultra-compact design with programmable Omni Point mechanical switches. With OmniPoints, the actuation distance may be customized per key from 0.4 to 3.6 millimeters, unlike with conventional switches. The Apex Pro features a multimedia scroll wheel and an inbuilt OLED screen above the Numpad for controlling the actuation point of the switches.

The Vulcan TKL Pro RGB gaming keyboard has Titan optical switches and is a sight to see. It features an 88-key configuration that saves you precious desk space while yet being functional. With the ultra-low profile design, wrist fatigue and other discomfort are almost eliminated. Vulcan TKL Pro’s build quality may be characterized as halfway between a mid-priced and a low-end board. It’s made out of a tough plastic casing with detachable, flip-out feet.

When it comes to wireless performance, the Logitech G915 is hard to beat. It features a sleek and elegant low-profile design thanks to its ultra-thin 22mm profile. There are also numerous specialized G-keys, profile keys, and multimedia buttons on the full-size layout. Despite the fact that the board is very tiny, the quality of construction remains uncompromised. The G915 is very strong and long-lasting thanks to its steel-reinforced foundation and aluminum alloy top casing.

Split ergonomic mechanical keyboard designed for sports gaming, the Kinesis Freestyle Edge RGB. You may split the left and right halves, which was designed to accommodate people of various body shapes and typing habits. You may also tent up the sides at an angle if you buy it with the external raise kit. There’s a 75 percent form factor on the Kinesis Freestyle Edge.

The full-size, ergonomic Cloud Nine C989M keyboard is designed for competitive gaming comfort. The one-third and two-thirds design enables users to maintain a natural breadth for each half. This attempts to increase productivity while reducing the risk of repetitive stress injury (RSI). The C989M looks and feels fantastic right out of the box. Because the integrated wrist rests have 7 degrees of tenting built in, the polycarbonate chassis is substantial and weighs a fair amount.

The Redragon K585 DITI is a wireless mechanical keypad that may be used with one hand. The small 42 key configuration is designed for laptop gamers. 7 macro keys, hot-swappable switches, and RGB illumination are also included. The keypad’s design is similar to previous one-handed keypads that mimic the layout of a standard keyboard on the left side. Nevertheless, the K585 DITI differs in a few respects.

The Fnatic Streak65 is a 65 percent mechanical keyboard that’s very light and sensitive. Custom speed switches and ultra-low-profile floating key caps were developed by the Fnatic team especially for esports use. The Streak65 is remarkably light at less than 400 grams, making it perfect for gamers who are always on the go. Even yet, the case’s top plate is made of solid metal, so it’s not weak.

Tartarus Pro is a device:

Razer analogue optical switches are used in the Tartarus Pro Half keyboard gaming. These hot-keys are designed especially for MMO players and can be completely customized using the Synapse 3 software. The Tartarus Pro features a 20-key layout, with a space bar tucked under the thumb pad. With the thumb pad, you can move in 8 directions at once, and the tip can be removed.

Know about Half keyboard gaming before purchasing:

It’s critical to be able to use a half keyboard gaming with ease. You’ll be able to play better games as a result of this. Upgrading your keyboard to an ergonomic model will allow you to game without discomfort for hours on end. Ergonomic gaming keyboards include wrist support, well-placed keys, and a curved surface that conforms to the natural contour of your hands.

The ability to use wireless technology:

A gaming keyboard with wireless capability is a big benefit since it offers you mobility. The keyboard’s Bluetooth connection lets you place it almost anywhere, even up to ten meters away. Older devices may include a USB Bluetooth dongle that may be used to enable and improve wireless connection. Many wireless gaming keyboards come with this dongle.

A no-frills gaming pad, a one-hand keyboard gives you all the keys and buttons you need to play games while keeping the irrelevant ones out of the way. There are a lot of them out there that are portable so you can take one of these with you to play with a buddy. Half keyboard gaming have developed throughout time to keep up with the ever-changing dynamics of the gaming industry. They are now more complex than ever.