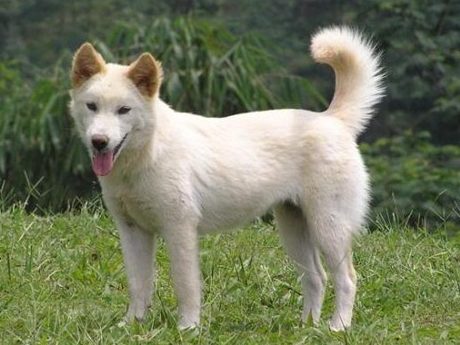 Kintamani dog is the birthplace of the island of Bali, off the coast of Indonesia. Favoured by Balinese and Indonesian pet owners alike, the Kintamani dog breed is also officially recognized as Bali’s sole dog breed. The International Canine Federation, or Fédération Cynologique Internationale, just recognized this breed in 2019.

The Origins of the Kintamani Dog

The ancestors of the modern Balinese Kintamani dog arrived in Bali around three thousand years ago. Using genetics, scientists have determined that the breed originated with stray dogs from Bali, placing it in direct genetic lineage with the Australian Dingo and distantly in lineage with breeds from Asia. Due to Bali’s island status, the local street dogs have remained mostly uncontaminated by outside bloodlines throughout the three thousand years that humans have been observing them there.

Size of a Kintamani Dog

However, it is important to remember that the Kintamani dog is still classified as a hybrid by all but one kennel association. Keep that in mind when you read about the breed’s dimensions and weight. Larger variances in size and stature are two traits shared by animals of mixed breeding. The size of an adult dog may sometimes be predicted based on a puppy’s parents, although this is never a definite thing. So, if you see a considerable weight and height variation, this is why.

The typical weight for a healthy Kintamani is between 28 and 39 pounds, although this breed does need a lot of activity. Obesity is uncommon in this breed since they have a moderate to high activity level and need regular exercise to burn off part of that energy. Typically, their weight is well-balanced in height and length.

The fur of a Kintamani is medium to long in length and double-layered for harshness. Their coats are low-maintenance and simple to care for under regular circumstances. Be prepared to brush and clean up twice a year when they blow their coats. They need a bath around once every two months since they are cleaner dogs.

Many different hues are represented in this breed. White, black, beige, black and fawn, and brindle are the most prevalent.

The Kintamani breed, fortunately, has a long tradition of excellent and healthy breeding. It allows them to maintain their health and fitness far into their later years of adulthood. The average lifespan of a dog of this breed is 14 years. Even though this is a breed with a very high prognosis for health and longevity, it is still important to take your dog in for checks regularly.

The Characteristics of a Kintamani Dog

The FCI says they are “vigilant, clever, attentive, mild, loyal, and simple to teach.” Despite this, it should be noted that they are still considered a hybrid species. Although the Balinese have existed on the island of Bali for centuries, little is known about their attitude toward individuals from outside Indonesia.

How to Train The Kintamani Dog?

The Kintamani is an intelligent breed that responds well to training. You would need to deal with their boundless vitality. Taking into account and working with their high levels of energy in a way that would complement their training would make it much simpler. They need a lot of attention every day, which should be focused on teaching them in the first few years of their lives. Training will go more smoothly if the dog is given many opportunities to expend its boundless energy via play.

What is the average price of a Kintamani dog?

The cost of a puppy varies from breeder to breeder, just as it does with any animal. Because of its scarcity outside Bali, this breed is pricey but not exorbitantly. A Kintamani puppy from a breeder outside Bali may range from $600 to $1,500. In contrast, if you’re permanently relocating to Bali, you can buy one for a reasonable price (certainly less than $1,500).

In contrast to cases where the species is threatened with extinction because of its scarcity or lack of visibility, this one is doing poorly in its native habitat. They are not like many rare endangered species that have had their occupations eliminated over time, leaving them destitute. They eventually gave in to the allure of family life and settled in as a reliable and charming crew member.

They have a high degree of territoriality and often do not get along with other dogs or animals.

A Kintamani dog, how much do they cost?