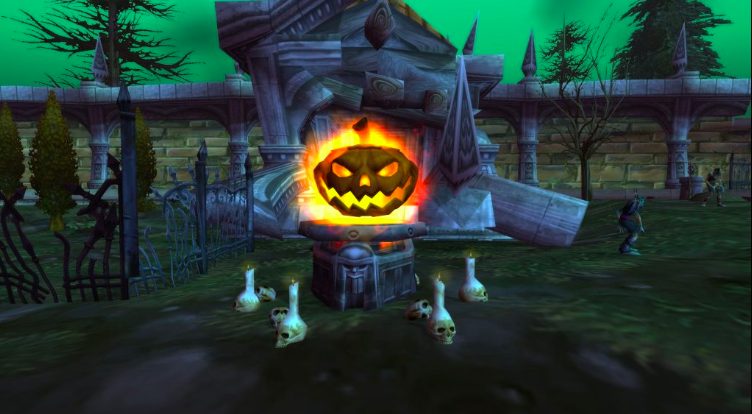 Knights of hallows end: Blizzard has at long last taken the choice to spice up Hearthstone with some event that gives away more than just packs, and the first one that we have in store is based on the infamous Headless Horseman that appears in the World of Warcraft world. The event will begin on the day patch 24.6 is made available for download and will last fourteen days, ending on November 16th. Here we will give you all information about Knights of hallow’s end.

In the meanwhile, players will have the opportunity to participate in tasks that are exclusive to the event, which will earn them the following rewards at Knights of hallow’s end:

The return of the knights to the kingdom of ice and snow:

It makes perfect sense to bring back Knights of the Frozen Throne, the expansion that included a storyline that revolved around the Lich King in the game’s earlier iterations. The base set now consists of every card from this expansion and will continue to do so until the March of the Lich King expansion is made available on December 6th. It is only natural to reintroduce the themed addition, given that the main focus of the event is on the Headless Horseman travelling north to assist the Lich King in the Knights of hallow’s end.

Capturing Silvermoon from the Knights of Hallow’s End:

You are here because most of the quests use the game mechanics introduced by the expansion. Furthermore, given that these quests are the most important source of experience that will allow players to advance along the rewards track and earn rewards, completing these quests as quickly and easily as possible is why you are here in the first place.

Playing Hearthstone will earn you Event XP, comparable to what you receive on the seasonal Rewards Track. Daily and card-specific missions are the quickest way to earn Event XP, but you may also earn Event XP by completing other tasks. The next deck is the best one for each Quest to maximize your Knights of hallow’s end gains if you need more time to grind out the content.

Although these Hearthstone decks are far from the finest available, they are adequate for the competition they are entering. Now that all that information is out of the way, you will see below the most optimum methods to fulfil the individual card missions if you only play Standard mode and are the kind of player that destroys all of the Wild cards as soon as the new season begins.

The method used in Evolve Shaman is simple enough;

Playing a card like Thrall, Deathspeaker, or Convincing Disguise may help you advance toward victory after you have a board full of minions who have completed their trades and need some evolving. It would be best if you had more than expensive minions to ensure victory in the games. In that scenario, you may finish them off with a Sire Denathrius, then play a Bolner Hammerbeak and Brilliant Macaw on the turn after that, and if you want, you can play a Brann Bronzebeard as well as need that extra damage.

To finish this Quest as quickly as possible, switch to Casual mode for one or two games and then queue up with a Paladin deck stacked to the gills with as many different Lifesteal cards as you have in your collection. The deck that we are using will list what we used to complete the Quest in a single game, but if you still need some cards, add ones that heal, draw cards, or steal life; you may already have some of them. Knights of hallow’s end.

Activate the of prince keepeth, caldarium:

In the current Standard format, Keleseth is most likely the only one of the three princes who successfully. Although you will not see this Rogue deck on the competitive scene or in high legend play, it is a fantastic deck to use if you want to advance quickly through the early Hearthstone levels while simultaneously completing this Quest. Playing Keleseth or Snapdragon, then using Shadowstep to put it back into your hand, and finally using it again as part of your plan is recommended. In this manner, the minions in your deck will have fantastic stats for a very low cost.

Because Mages can only fight Sindragosa, this is the most difficult mission. The fact that Sindragosa costs eight mana makes this challenge much more difficult since it may be quite difficult to reach a stage in the game when you have a chance to deploy her on the board.

Because of this, we recommend utilizing a traditional Spooky Mage deck, which includes the Hero Power package and several cards that interact with Volatile Skeletons. Stalling out the game, eliminating as many Volatile Skeletons as possible, activating either your Mordresh Fire Eye or your Sire Denathrius, and winning the game with large swings are the keys to victory when using this deck.

Because of this, we suggest you sign up for the Casual tournament rather than the Standard one since the purpose of th

is deck is not to win games and climb the ladder; rather, it is to finish the Quest. The Lich King cards were once regarded as some of the most powerful in the game when Knights of the Frozen Throne was first introduced, but they once were better.

Discovering additional copies of Arfus using the Selective Breeders discount and dredging him with Harpoon Guns is the strategy for completing the Quest. Alternatively, you can cheat him out of the deck using Pet Collectors or Azsharan Sabers, activate the Deathrattle using Devouring Swarm, Play Dead, and Defense Attorney Nathanos, and then revive him using Revive Pet.

You will be rewarded with a significant number of Lich King Cards if you carry out all those actions. Hopefully, cheap Cards such as Batty Guest, Irondeep Trogg, Peasant, K9-0tron, Vicious Slitherspear, Doggie Biscuit, and Ramin Mount are here so that you can get through the early game and play Arfus and the Death Knight cards later on in the game.