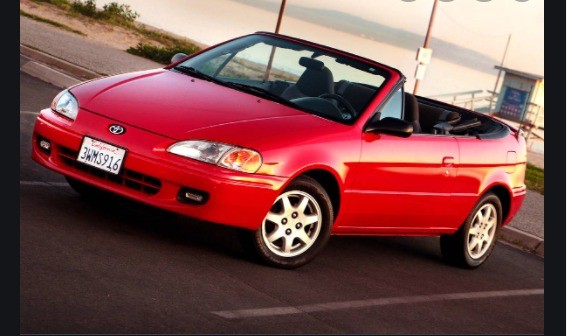 Toyota paseo sports-oriented subcompact car, the Paseo, also known as the Toyota Cynos in Japan and other territories, was produced from 1991 to 1999 and was based on the Tercel. It was available as a coupe and as a convertible in later editions. Toyota discontinued selling the vehicle in the United States in 1997, but it was still available in other countries, including Canada, Europe, and Japan, until 1999. The Paseo shares a platform with the Starlet, like the Tercel. Several parts can be swapped amongst the three.

Even though you can now purchase one for a few hundred dollars, the price is gradually rising again. Maybe it’s because the automobile is becoming a vintage classic, or maybe it’s just getting the adoration it deserves. Focus today is on the long-forgotten Toyota Paseo, a high-performance sports car. The car didn’t do as well as expected in the market during its first few years of manufacture, which began in 1992. As a result, it now appears to be a relic of the past.

Instead of being sold as a genuine sports vehicle, the Toyota Paseo was advertised as a sports-style automobile, which turned off many customers. This branding informed the public that it might not be up to the quality of a conventional sports car. Even so, it had the appearance of a sports vehicle. Paseo’s specifications were somewhat limited compared to other Toyota models and sports cars. Its 100-horsepower 1.5-liter inline-four engine was the top of the line. It had a 5-speed manual and an automatic transmission.

Where You Can Get One Now:

Even though the car’s final production ended in 1997 and its final sales from new dealers ended in 1999, it is still for sale today. As a general rule, prices fall between $700 and $4,000. The higher the second-hand value of an automobile, the more recent the model and better equipped. Classic cars like this may be worth the extra money if they’re still in good condition. If you’re considering buying a Paseo, you should put down as much money.

The Smaller Details of the Interior:

The Toyota Paseo drew inspiration from the Toyota Tercel model in terms of look and characteristics. Both had a 1.5-liter engine and a sports car-like appearance. Though not as popular as Tercel, it managed to find its audience. The Paseo was initially intended to be a two-door coupe in its first iterations. A soft-top was added to the design in the future. The second generation of Toyota’s Paseo was a step up in inside features.

CD player, three trim options, and decals are all included in the package. Later iterations of the engine were not given any particular treatment.

It was rated at 69 kW (93 horsepower; 94 PS) and 136 Nm (100 lb-ft) of torque in California and other states. In 1993, emissions regulations were implemented at the state level in California. A 5-speed manual transmission and a 4-speed gearbox were both available for the vehicle at its introduction.

During the 1996 model year, the second-generation Paseo was launched in Japan and North America. The only visible modification was in the body sheet metal, except for some upgrading of the engine electronics. In October 1995, the Tokyo Motor Show unveiled a convertible model, which went on sale in August of the following year.

The Paseo was discontinued in the United States this year. The performance of the 5E-FE engine in the second-generation Paseo has been decreased to California CARB model standards to cut emissions.

Styling is the first step. The front end has a continuous, smooth appearance thanks to the grille disappearing behind the bumper. It also improves the vehicle’s frontal aerodynamics. The rear roof pillar is narrower, and the windows are more significant this year.

Many people will be happy to see the changes from last year’s inside. There’s more room now, and people can sit comfortably in the back if coaxed.

Toyota is a significant player in the global automotive industry, ranking in the top three spots. Worldwide, Toyota is famed for its dependability. Toyota’s Corolla is the most popular model. It is also a sensation. Because of Toyota’s obligation, used Toyotas are exported to Africa. Used car and van sales and exports are the company’s specialty.

Over 500 pre-owned vehicles are on the lot at any given time. Exporting to Africa is something we’ve done for more than three decades.

Petrolheads, it seems, were more concerned with speed than with durability when this car was released. To follow up on the initial Paseo release, Toyota created two more vehicle iterations. In 1996, a newer model had a more seamless appearance. However, the engines are identical in size. Another came out in 1997 and had a convertible top, perfect for the period.

To sum it up, the Toyota Paseo doesn’t deliver on speed and torque expectations for petrolheads. On the other hand, the car was designed to be more durable than fast. Buying a pre-owned Paseo is a terrific idea if you’re seeking a neglected Toyota classic. Sales, shipment, and paperwork processing can all be handled by one person because Toyotas are known for their long lifespans and durability.

Read also: Is it possible to drive under a moose?